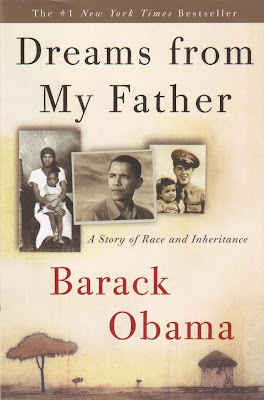 My copy of Barack Obama's Dreams From My Father arrived today; I ordered it on November 6, and it took 12 days to ship. Amazon is usually super fast, but I suspect that orders for this book were numerous and backed up.

I wanted the hard cover version, but I didn't want to pay $25.95 for it, and Amazon discounts significantly its hardbacks ($15.57). It's a First Edition, but not really--this volume was a re-release, issued once the publishers realized that Obama was going to run for President, so this is a First Edition of a re-released book. And they probably ran 1,000,000 First Edition copies...

I look forward to reading it soon (I have to finish some other reading first, but I will read it before the inauguration).

Obama originally published this book in 1995, when he was just 33 or 34. Even then, he was thinking about his legacy and his place in the world. It's rare for a young person to pen a memoir (unless he or she is a celebrity), and from what I have gleaned just from a quick glance, it seems to be a cerebral book.

Did he know, even that long ago? Could he see into the future?

He certainly ran like a candidate running for his life.