#68: Are Some People Doomed to Permanent Poverty? 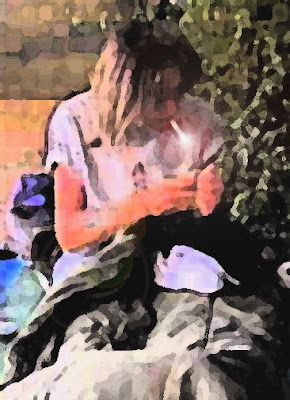 Are some people simply doomed to perennial poverty and/or chronic indebtedness?

I think so. For whatever reason--drugs, overspending, misplaced generosity--some people will allow a windfall to simply slip through their fingers.

I once saw clips from a documentary called Reversal of Fortune; filmmaker Wayne Powers wanted to carry out a social experiment in which he would give Ted Rodrigue, a Pasadena homeless man, $100,000, with only one string attached: that Powers be allowed to film Rodrigue as he spent his unexpected windfall. Powers wanted to prove or disprove the social theory that money is the way out of chronic poverty.

See these stories about how Ted spent his windfall:

The Power of Personality: What Happens When You Give a Homeless Man $100k?

The homeless are different from you and me, and it's not because they have less money. It's because they are extraordinarily low in what personality psychologists call conscientiousness. That's my theory, anyway. A quite watchable documentary on Showtime (and that's high praise from me, I strongly prefer fiction) puts my theory to the test. It's called "Reversal of Fortune," and it's got a simple set-up: The film-makers picked Ted, a homeless man in Pasadena, gave him $100,000, and filmed the results.

We initially see Ted's life on the streets. He sleeps under a bridge and does enough recycling to pay for beer, cigarettes, and a little food. He is surprisingly articulate - low IQ is not his problem. It would be easy for someone to argue that Ted has simply been unlucky, and that his drinking is "just a response to the hopelessness of his situation."

Ted's case suggests that money alone is not the way out of poverty. Evidently, Ted felt comfortable in his life, that the windfall was actually a source of conflict for him.

Of course, Ted's case is not definitive proof; had the windfall been given to a working person who was temporarily down on his luck, the outcome probably would have been different.

I have often thought about what I'd do with a $100,000 windfall (if I were homeless and down on my luck, that is, and not an alcoholic or druggie).

1. I'd find a modest furnished place to live. Having a roof over my head and decent bathroom and kitchen facilities would be top priority.

2. I'd buy some decent clothes (for every day and job hunting) and lots of soap and towels for bathing.

3. I'd invest in a used car; these days, flexible and reliable mobility is almost as important as having a place to live (unless I lived in a metropolitan area with reliable public transit).

4. I would buy myself a decent meal and then go grocery shopping for staples.

5. I would invest the rest of the money in a short-term CD (so that I could think about what to do with it without making an impulsive decision). I would be willing to work at any crap job, just to get on my feet.

6. For long term, I would buy a modest house or condo and furnish it with furniture from Goodwill--just the basics: table and chairs, sofa, bed, maybe a cheap TV (but no cable). I would go to the library for internet and books and other reading.

7. I would look into job training or college (I would continue working, although I would always be on the lookout for a better-paying job).