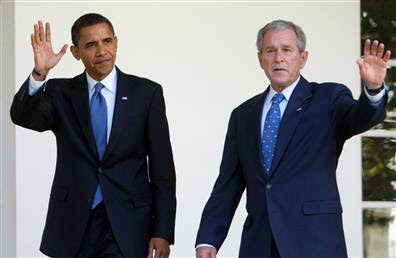 
A few minutes ago, NBC cut into programming to show live coverage of President-Elect Obama and wife Michelle Obama arriving at the White House for a special meeting with President Bush. According to Brian Williams, this is a historic event; typically, the White House meeting between current and future president usually takes place much later, some time in December. 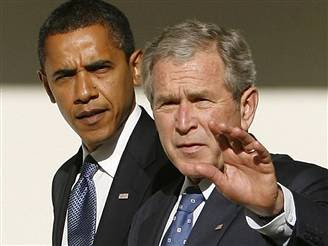 In light of the contentious campaign season, this is an unprecedented move. Obama was particularly harsh on George Bush and his archaic policies, so it may seem puzzling that Bush would offer such a warm welcome to a man who tore into his policies.

But I think I understand why Bush is being so accommodating.

Remember the Clinton-Bush transition? How outgoing White House staffers removed all the "W's" from the White House keyboards? How the Clintons removed some expensive trinkets from the premises that weren't really theirs to take? Unfortunately, such antics cast a dim light on a presidency that had been fairly successful (well, minus the Lewinsky nonsense and the impeachment proceedings).

Granted, the 2000 election was utter chaos, and we'll probably never really know who won Florida and, consequently, the 2000 election, but the Clinton antics reflected more negatively on Clinton than George W. Bush, who, at that time, was making grandiose promises to engage in "compassionate conservatism" by reaching across the partisan aisle. Among the American people, who were largely willing to offer Bush the benefit of the doubt, the new president enjoyed the glow of the Honeymoon period, and Clinton simply looked like ugly sour grapes.

I suspect that Bush is making an attempt to salvage some of his legacy by not acting out against the new president-elect; let's face it, Bush's presidency has been a disaster, and history is going to be harsh on the bumbling and stammering Number 43, who made unsound decisions, both foreign and domestic.

Also, from all accounts, Bush has a genuine fondness for Barack Obama and is able to separate the personal from the political, a trait inherited from Bush, Sr., who still maintains a friendship with Bill Clinton.

Okay, so today is kumbaya time, but what about the immediate future?

Will the rest of the transition go as smoothly? Or as Obama's agenda begins to gel against Republican policies and conservatism, will the knives come out?

According to Valerie Jarrett, co-chairman for the President-elect transition team, Obama, on January 20 (or shortly thereafter), may overturn some of Bush's more controversial policies, such as his ban on stem-cell research. Will Bush take these probabilities as personal affronts?

This will be interesting to watch.

I have almost finished reading the Newsweek article (see yesterday's post)--now enjoying the the "dishy" antics of one Sarah Palin.

Unfortunately, we haven't seen or heard the last of the "Gotcha Girl."
*
Posted by Jennifer at 2:06 PM