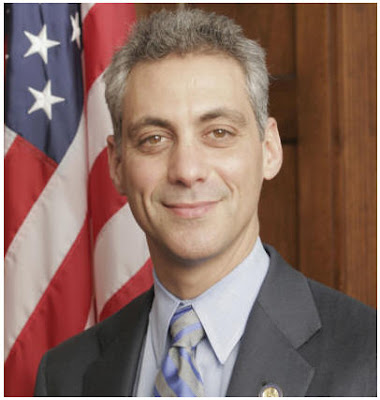 President-Elect Barack Obama has announced his Chief of Staff today.

"I announce this appointment first because the Chief of Staff is central to the ability of a President and Administration to accomplish an agenda," said Obama. "And no one I know is better at getting things done than Rahm Emanuel."

From 1993-1998, Democrat Rep. Rahm Emanuel, 48, was a senior advisor to Clinton at the White House. He was also a leading strategist for Clinton's failed universal health care initiatives.

As a citizen, I have some reservations about Emanuel (who is considered to be a political insider), but much will depend on Obama's other staff. For now, I will trust that Obama has made a wise choice.

I would hope that the President-elect, in keeping with his campaign promise of change, would also select some "outsiders" for his staff and Cabinet.

Other possibilities for Obama's staff:

Mike Huckabee (a definite long shot ultra-conservative, but someone to take seriously)

About Rahm Emanuel and other possible Obama picks