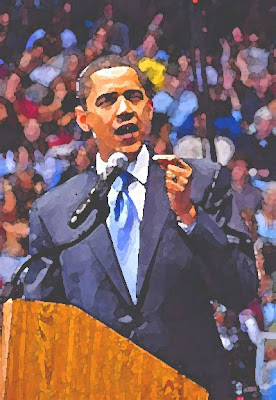 Barack Obama recognizes the debt he owes his predecessors; without Martin Luther King and the unsung heroes who put their lives on the line, this defining moment in history would not be possible, and quite likely our brilliant President-elect would be working a minimum-paying or low-wage job or, perhaps, even in jail (a fate suffered by most of the early civil rights leaders and writers)--or not even born.

Sad, but true; those who enjoy the status quo are not likely to give it up for purely altruistic reasons--it happens only when the oppressed begin grumbling and then embarking on peaceful or even violent protest.

Or, in the case of Rosa Parks, a simple refusal to give up her seat to a white person. Park's refusal, heard around the world, was a not an intentional political act designed to change the world, but the weariness of a working woman whose aching feet hurt like hell, darn it!

I come from an era when Martin Luther King was often vilified for "not knowing his place." Even in the North, I often heard rumblings from both friends and relatives that Blacks needed to "stop all that rabble-rousing."

Shortly after MLK's "I Have a Dream" speech, my late grandmother said, "That Rev. King has a bullet with his name on it."

Even as a child, I was horrified that someone I loved would even think of such a possibility, but I now understand that she wasn't afraid of King but afraid for him. Even if I didn't, she understood that trail blazers often pay a steep price for their forward-thinking viewpoints.

In a sense, Barack Hussein Obama is also a trail blazer, the first African-American to win the highest office. Whatever he does in office will be scrutinized by all ethnic and racial groups.

Right now, expectations from the African-American community run high, perhaps too high as Obama tries to placate and unite the entire nation. Yes, he's Black, but he also represents all Americans and will have to work for all groups.

"I'm here because someone marched." What a humble statement from a man who is known to have significant high self-esteem (albeit earned) and ego.

Read the full story behind this speech at TheBlueStateDOTcom